So…what do you think of our fixie?

For a few years now there has been a growing trend to take old bikes and make them single speed. The industry has caught hold of this excitement and now many manufacturers produce bikes that fall into this category. Over this period of time I’ve had endless people come into the shop and ask me what I think of their fixie or single speed. Now if I am completely honest, I believe a fixed wheeled bike should only be used for racing on a velodrome (those big oval things you see on television) or for serious speed training. However, you can’t be an old fuddy-duddy and have to move with the times… which brings me to a project that is complete enough to show off, but still has a little refining to go. It also means, instead of having to comment on a pile of junk that has come out of a skip and not been treated as anyone’s loving transport should be, we can proudly say “WHAT DO YOU THINK OF OUR FIXIE?” 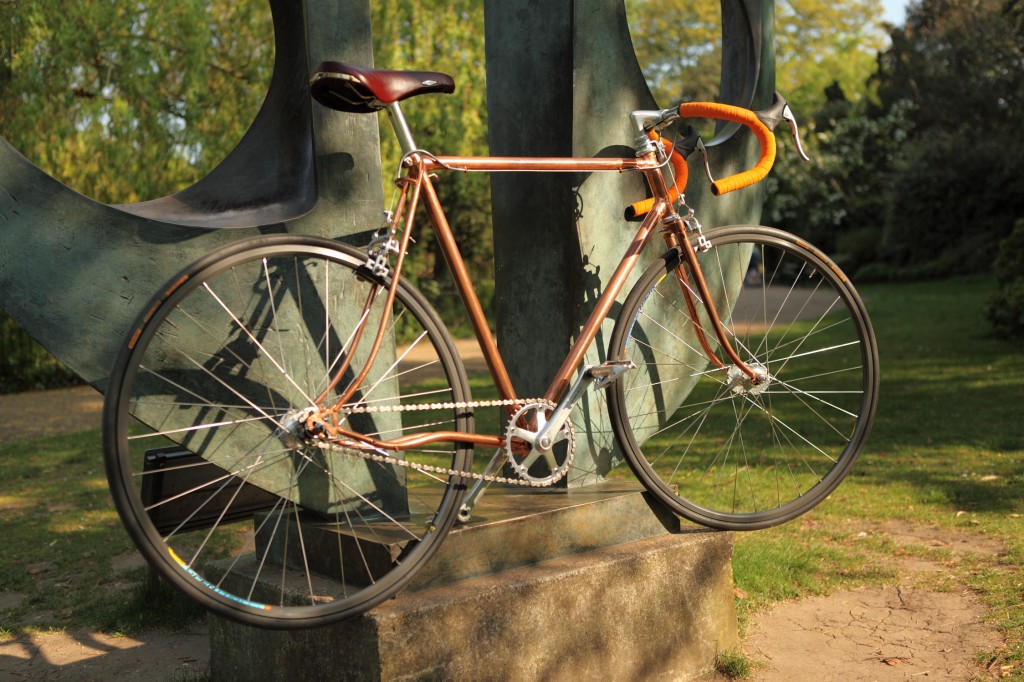 It all started a couple of years ago when we were very fortunately given a Hetchins curly stay frame. It had been kept in a cupboard for over ten years and was in need of a new loving home. It was a little worse for wear, but come on, this piece of British engineering and art was made in 1953. It hung around in our workshop for a while and then an urge for me to get back on the track at Herne Hill two summers ago got it back into action. We used whatever bits we had lying around except for hand building a pair of wheels and getting in a pair of Nitto steel track bars. What a beautiful responsive ride it still is… I have to admit that I wasn’t expecting it to be as good as it is! 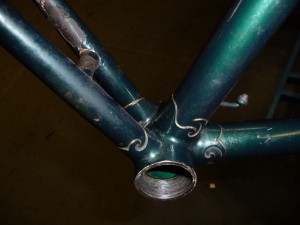 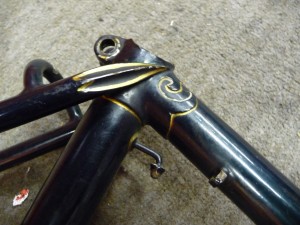 For a year or so it took pride of place in our foyer area, but was still lacking something. We discussed whether we should have it painted or leave it in its original, though battered paint job. Was it going to just be used as a track bike or get the chance to fly on the open road once again? I guess we always knew it had to be something really special!

Anyway, we received a phone call early this year from a company that specialises in the electrolysis nickel plating process. They asked us if we could send them a set of forks or a pair of handlebars so they could do a sample of their work for us to show customers. I thought the forks from the Hetchins would be the perfect thing to send. After a bit of discussion and finding out Nitec also do copper plating we called them back. Sure, I had probably watched one too many episodes of American Chopper, but we posed the idea of having the whole frame copper plated to them. They were only too happy to get involved and were really excited about the outcome.

Now, not being sure if we were about to ruin a beautiful part of British cycling history, we approached Len Ingrim who runs The Hetchins Register. We discussed what we wanted to do to the frame and whether this would be detrimental to the value and historic significance. He too was quite excited about the project and on checking the serial numbers, informed us that this was one of only two in the world known to be in circulation.

So, we wasted no time at all. We stripped the bike down and took some last photos of the original 48 year old state whilst Jason Prain (a local be-spoke furniture maker) made us a box that would certainly protect it from any foul in transit. And off it went to Nitec! A couple of anxious weeks went by whilst we found some suitable parts to finish the old girl off on her return. I have to say after all the thousands of hand-built bikes I have made in my life, it really was something I put my heart into and was desperately waiting to get it all together.

For 15 years I’ve carted around a set of Dura Ace aero brake levers in the original packaging… perfect project for them to go into use! I had been moaning to my friend Oli that I really wanted a set of the 7400 Dura Ace cranks for a while as I think they are the best looking ones they ever produced. He tracked a pair down at The Bay and met some guy on the streets of central London to complete the transaction. 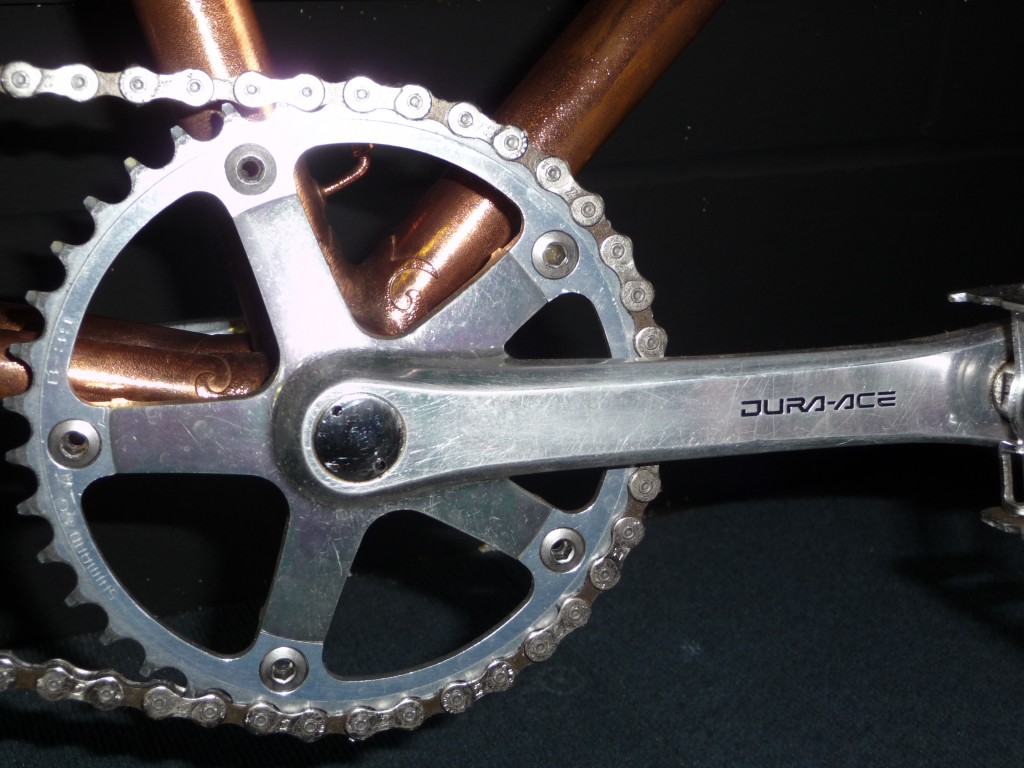 I managed to find a place on The Bay in America that had some new and original center-pull Dura Ace brakes along with an original Dura Ace front brake cable quick release. I have done a little research and believe they are from the early 70’s, maybe 1973. I was only born in 72 and they look better than I do now. Though, I haven’t been sitting around in the back of a shop somewhere. Well I just had to snap them up. 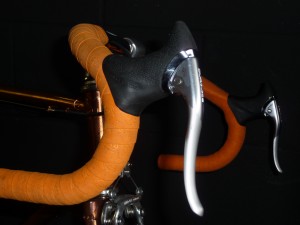 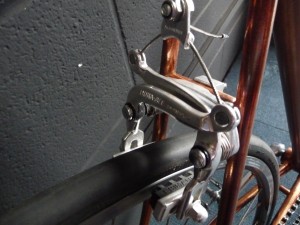 I had already spoken to Karen the upholsterer from The Chair Sanctuary about having a “one-off” seat. So, using an old Rolls saddle that had done at least 20000 miles and was looking like it had, Karen very kindly recovered it in our own choice of leather. I don’t know why, but the burgundy really took our attention and in hindsight was a great choice. Just shows that the old stuff really does last. All she had to do (no mean feat) was remove the old leather covering (painstakingly keeping the original brass hardware) and re-cover, fitting the hardware back on with brass rivets. Voila, a one of a kind San Marco Rolls saddle! The perfect complement to a stylish bike. 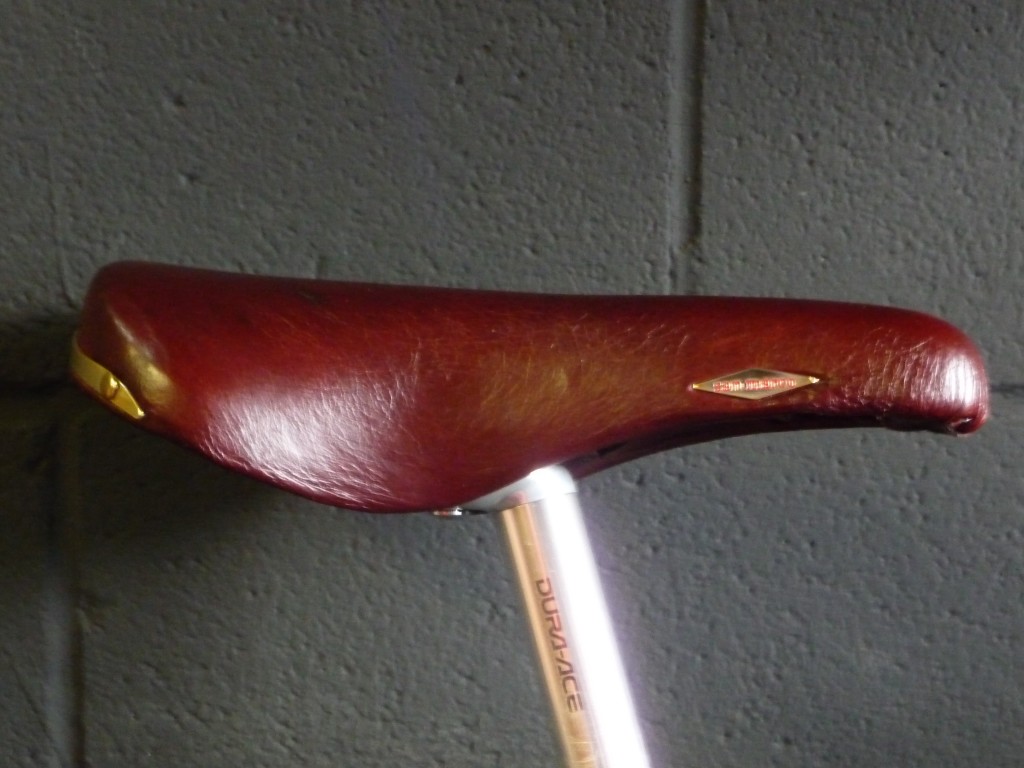 SO, three weeks from originally sending the Hetcins frame off to Nitec, it turned up! GOSH, when I opened the box I couldn’t believe the result. I was just over the moon. The luster was unbelievable and in complete honesty not what I was expecting. But, you know, I only really see copper on central heating or roofs. They have the worn in look of oxidisation to varying degrees. I tell you it was nearly like the moment in Pulp Fiction when they open the briefcase… are we happy? Yeah, we happy! 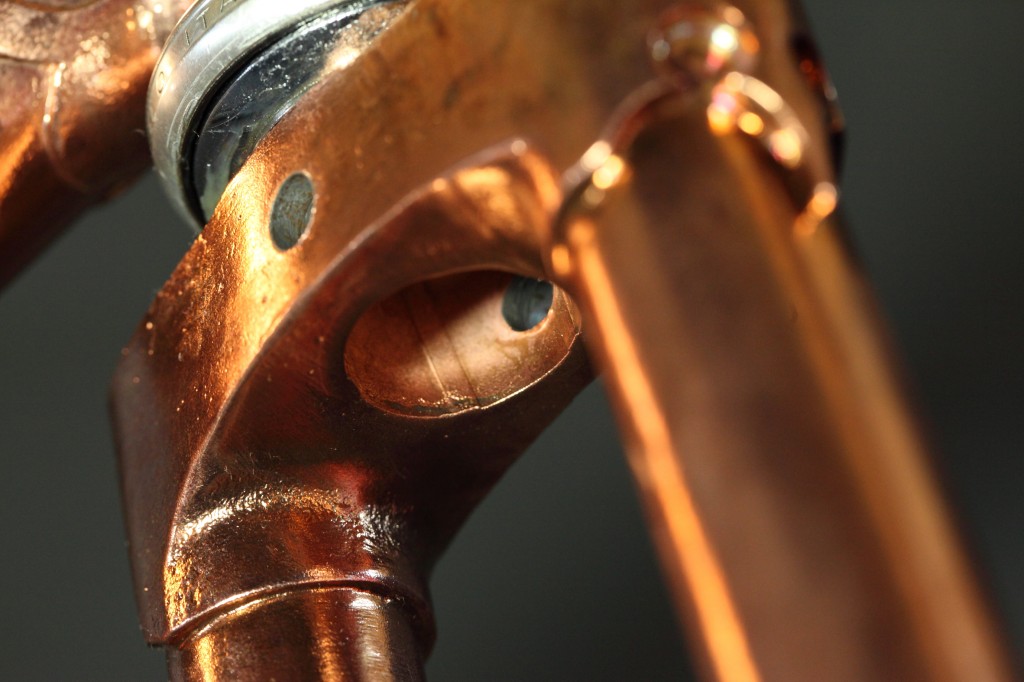 Some time has passed since she was built up and back on the road. To be fair the bike doesn’t lend itself to what I want it to turn out like as an overall finish. It’s a fair weather bike as it is sunny, but the way to get the real beauty of the frame finish out (and how it will end up anyway) is to get it out in the rain and ride it. She really is coming into being one of the best bikes I have ever seen. The natural lug lining in green is definitely going to end up more stunning than any hand painted stuff. 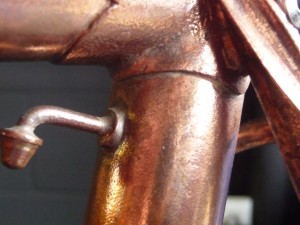 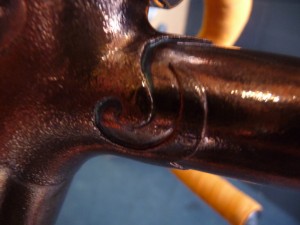 There are a few things we haven’t completed yet, like transfers, head badge and potentially part changes to make it a full Dura Ace bike, but we will keep you posted and open to suggestions. I want to make more bikes like this and really come up with some machines that reflect the test of time, an individual’s taste and modern technology and understanding. I’ve built a lot of expensive bikes and reformed complete rubbish over the years. If you are looking for a one off no holds barred personal reflection of who you are in a bike, you know where we are…

You know this whole project has lead me to understand why people get into renovation of all sorts of things. It has also made me feel like I would like to make my own frames, get back to basics and build bikes that will stand the test of time… watch this space!

NITEC – COPPER PLATING OF THE FRAME AND FORKS

OLI JOHN – AGAIN, INSPIRATION AND TRACKING DOWN A SET OF THE BEST LOOKING DURA ACE CRANKS EVER MADE

TAKI – GETTING THIS ALL OUT THERE ON THE INTERWEB

Good Friday saw a big move towards finishing this wonderful project and I think it is only a different handlebar stem and the head badge/transfers to finish her off. We fitted a Dura Ace headset and a set of wheels fitting of such a beautiful machine to complete the multi-era Dura Ace theme. 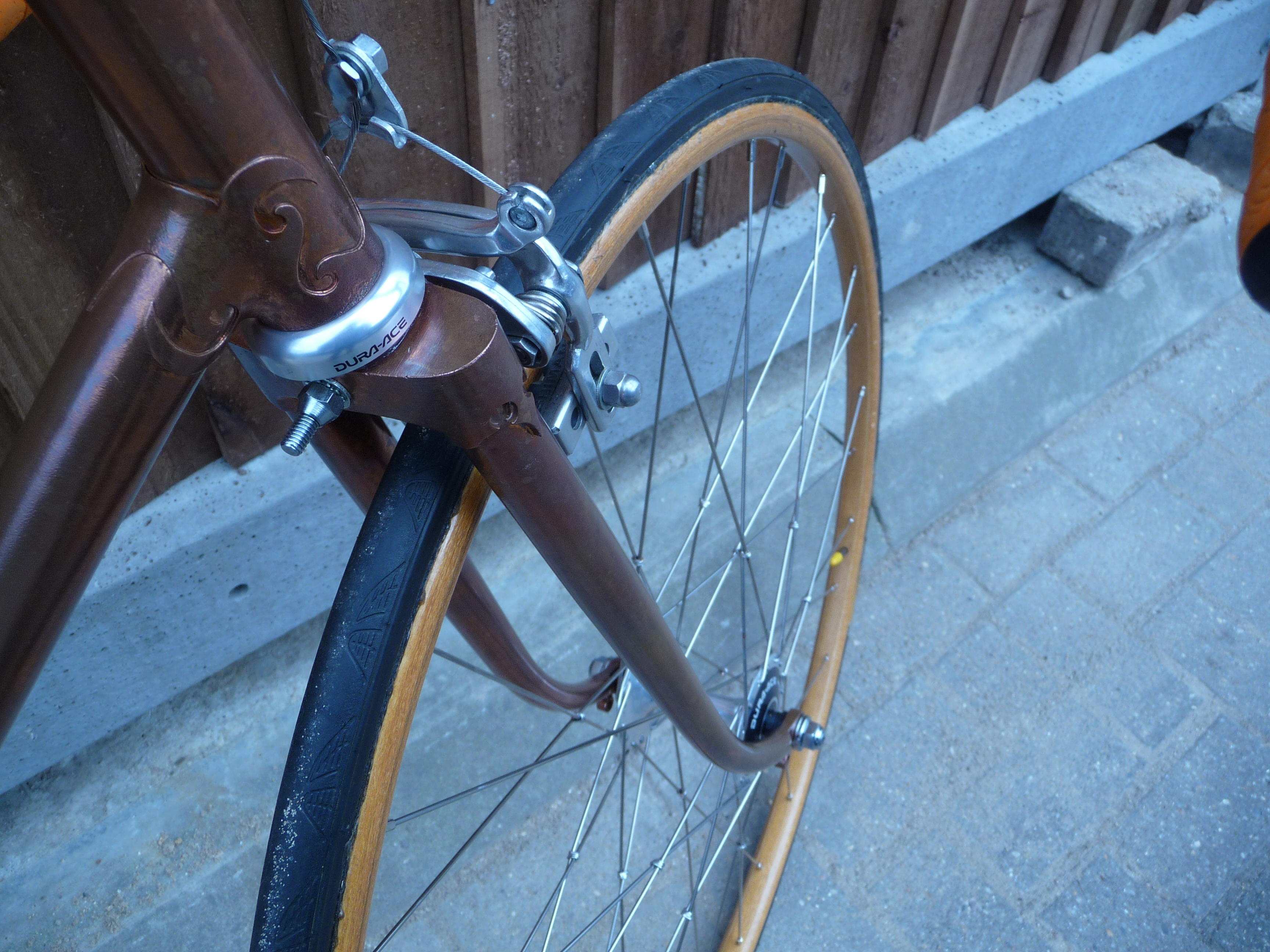 I built a set of wheels using  Ghisallo Brooklyn wooden rims, Dura Ace large flange track hubs with DT Swiss Champion spokes with a pair of Continental Grand Prix 4000 tubular tyres to set the whole thing off. I was looking for a pair of tubulars from a time long gone to suit the Hetchin’s era. However, it turns out the Grand Prix’s are just the ticket with the wooden rims. 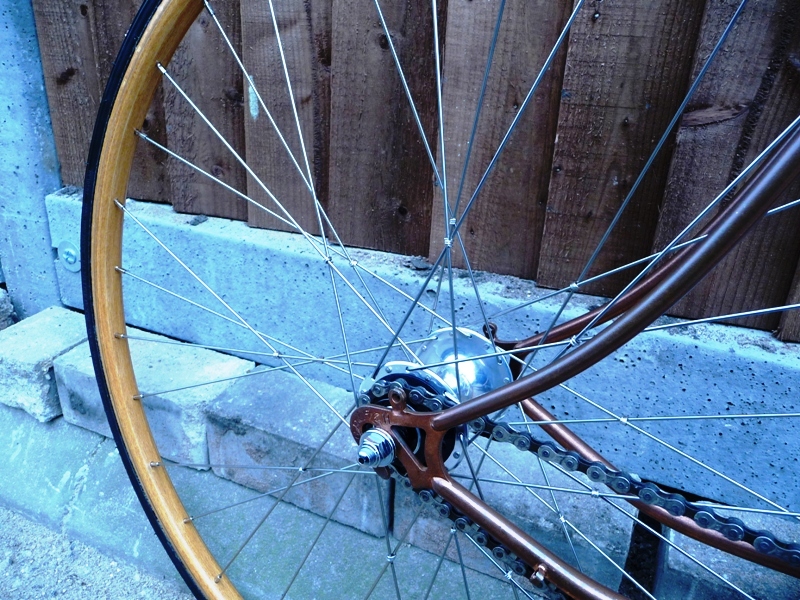 Ian worked his specialty of tying and soldering the spokes quite a few times that day (seems it is becoming ever more popular) and now we have the ultimate set of wheels for Our Fixie. 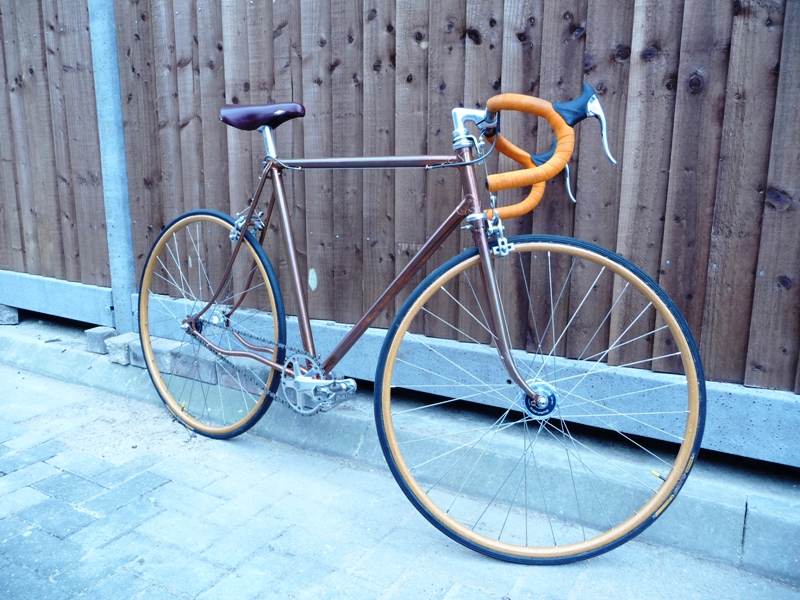 And if you are wondering what she looks like when the rain has got onto her, a picture says a thousand words… 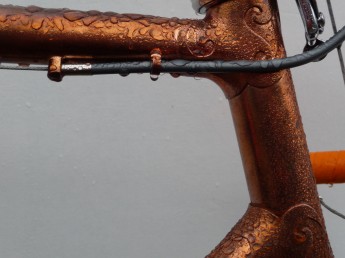